The CQR Story has been told in several different magazine, radio, and broadcast interviews. The one below happens to be a good presentation of both the genesis of the CQR devices and how they work.

How Do the Beta-Blockers Work?

My best guess is that it has an influence on the chakras and meridians. Don't forget that I stumbled on this; I did not intentionally invent it and I noticed the effect; it doesn't mean I had predesigned the effect. So I actually only know that when you make this and you hold these and you do this, this such-and-such a thing happens.

I only know it from a practical point-of-view, but I'm not a practical engineer, I'm a theoretical physicist. So I didn't set out to invent it. I stumbled on it and noticed the effect and I've been exploiting that, taking advantage of that effect. With a number of different devices, some of which worked and some of which failed. The ones that didn't work, I don't know why they didn't work. The ones that did work, I don't know anymore about than the ones that didn't. I don't know why they work; I know that they do, but I have, through trial and error, I have discovered several things that do work and many, many things that don't work. 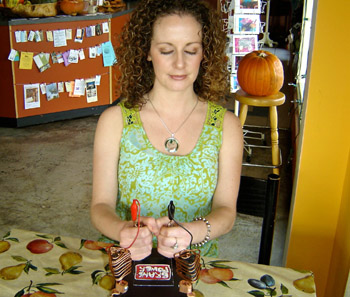 I say very, very clearly . . . very clear, especially in my book that as a theoretical physicist, I can only lay out theory. Theory only stands as long as the next person comes up with a better theory. Theory will change from month to month, from year to year, but the practicality doesn't change. For instance, I go to a wall switch and turn on the light, yet, there's not one physicist in the world who actually can tell you why that happens, really why that happens. All they can tell you is that it does happen and that you can construct things in such a way that you can make it happen, but why it happens is like . . . why is there gravity? Why is there electricity? Why is there magnetism?

The answer to that is nobody knows really why that is. The theories change every year.

Y: But the effect that we're noticing is that the beta is suppressed in some way. 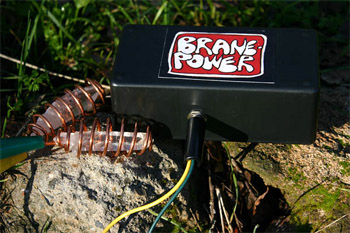 The portable Super Beacon Auto-mapper Beta Blocker helps you link up with your past, present and future lives like the regular Beacon AND offers the black tourmaline cleanser-charger.

The only way for alpha-theta to be stronger is that somehow the beta got suppressed, because there is no other way for alpha-theta to emerge other than the suppression of beta. Alpha and theta don't get any stronger than they are, so clearly, beta must be getting suppressed in some way. How exactly that's happening, I don't know. I only know on a practical level. On a practical level, when I do this, the alpha-theta comes up high; when I do that, the alpha-theta stays where it is and the beta comes up high, and so forth.

If I detune these, the beta comes right back up full force. If I tune them properly, then the beta is not there and the alpha and theta are stronger, but they're only stronger because of the suppression of beta. There's no way that they can get stronger than the beta.

Look, here's beta (shows left arm up about face level) and here's alpha-theta down here (the right arm is below the other one, not directly under, by less than a foot). That's the way it normally sits. So if this is stronger (meaning the right hand), it's not that it got up here (he raises his right arm to the same level as the left arm), it's that this went down there (demonstrating with lowering his left arm below the level of the other one). The only way for that to happen is for the beta to go down, not for the alpha-theta to go up. It's the only way because alpha-theta cannot become stronger than beta. It is revealed by an absence of beta. It can't be bigger than it is. They're dwarf, they're little tiny dwarfy things.

Then, that one also worked the same way, [short section not audible]

Y: Let's say that I made this thing by accident, I wouldn't know what it did.

Right, but I worked with biofeedback devices for 25 years, almost 30.

Just like if you ask me if an antiquity is real, I can pick it up, and in two seconds tell you this is real or not real, and I'm willing to stake my reputation as an archeologist on that, or as a curator on that fact. I can tell you, for sure, and you can send it to a laboratory and then find out.

Anyway, yes, you recognize the signs of somebody who's in theta, or somebody who is in alpha. It wouldn't do any good to tell you that I use my telepathic skills for that purpose because that wouldn't make any sense to you. But let's just say I sense it; I use some sensing, some way of determining or detecting that somebody is in alpha-theta.

You know because you've seen many, many examples of it. I can read somebody instantly. I do cold reads all the time, what I call psychic cold reads, but what the hell. I've given up trying to convince human beings of such things.